Hold on to your life vest because we are making a DIY Shark Hoodie Costume today!

It’s the week we all love to hate. SHARK WEEK! Has everyone else been avoiding their TV this week? I mean, REALLY, who watches this stuff? Most of us will be gracing the sandy beaches this summer and I know I don’t need any additional reason to be certain a shark is going to come up and gobble me up.

I made this simple beach cover up in less than 20 minutes and for a couple bucks. This hoodie was perfect to have on hand when we were in Hilton Head to throw on after the pool or while we were lounging in the condo. And it also makes a great shark hoodie costume for playing.

Now the comes the fun part- the teeth and fin. To make these, I used regular felt that was on hand. (thankfully my mother is a lover of fabric so I crashed her stash- like mother/like daughter) For the teeth, I first started to cut each tooth out in small triangles- but then realized it would be much easier to have an entire row as one piece. 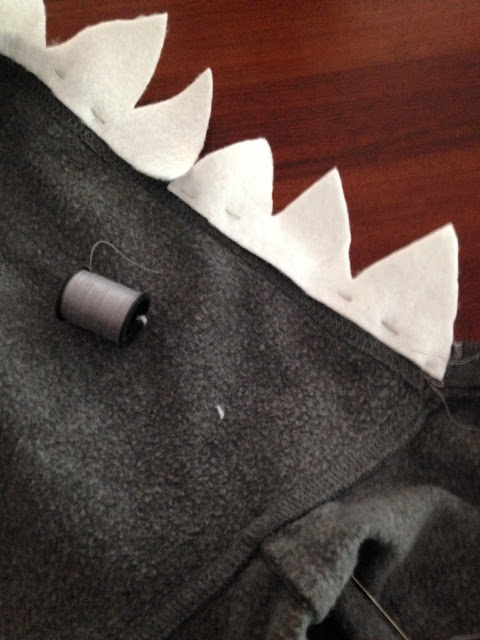 For the fin, I did the same sort of thing. Just traced out the fin shape onto the gray felt and sewed it onto the back of the sweatshirt.

I won’t be running from this little shark anytime soon!

So, tell me the truth- are you a Shark Week fan? Or do you just prefer adorable shark crafts instead? This DIY Shark Hoodie Costume has been such a fun thing to have!

{what to bring a new mom} New Mom Gift Basket