Last weekend we celebrated Sweet P’s 7th birthday with a Nerf Gun Birthday Party.  And we managed to make all of his 7 year old dreams come true!  Now, you can go ahead and file this party under “something I thought I would never do” because you can definitely bet that I never thought we would have a “weapons closet”. Or that I would create a party invitation that actually had a dart attached to it. Or that we would host a Nerf Gun Birthday party.

But we did! And it was so fun. Even The Big Sweet and I got in on the action, and I must say- I get why these boys like the whole Nerf thing. It really is fun! We had lots of fun putting this party together, and here are lots of Nerf party ideas for you to do at your own Nerf birthday party.

The invitation was super simple to make and a huge hit. Since all of the boys live very close, I just dropped these in the mailbox so I didn’t need to worry about an envelope to fit. To make these, I used my go-to website Picmonkey. For the background, I used blue camo and then just added the info on a white text box. The real kicker of course was including an actual Nerf dart with twine. (total cost- FREE)

It was like Christmas morning around here when the boys woke up and it was time to set up for the Nerf birthday party! We had been collecting Nerf guns all summer with quick trips to the Goodwill and we ended up finding armfuls for a couple bucks each.

Between that and getting lots for gifts and saving his own money to buy some, I couldn’t believe the collection we had for the party! (plus, we encouraged each guest to bring their favorite and I labeled them with tape and a Sharpie when they arrived)

The set up was simple, because let’s be honest, seven year old boys really don’t care about these types of things. But mama does, so she had fun putting a few fun things together for the Nerf Birthday Party. And Sweet P did love this really simple “wall” we created. It had pool noodle Nerf darts and some Nerf guns zip-tied to it. We made the “7” sign using finger paint and orange duct tape from the Dollar Tree. So all in- this little wall cost a buck and helped to create a fun backdrop and pretty pics! (and yes, I reused the pool noodles from the Bomb Pop End of School Party to make the Nerf Dart banner)

The cake was done by my favorite baker up at Publix. This is the third cake he has done for us and we are practically besties now. 🙂 But really, I just give him general direction and he created this- so super cute!  Sweet P added the Nerf dart in the middle. Nice touch little guy! I love this simple cake for a great Nerf party idea! Bullseye!

Would you even believe we found the Nerf plates and napkins on clearance at Walmart this summer for $1 a piece?!? That was a fun score!

My very most favorite Nerf birthday party idea had to be this Nerf Banner I made! Any guesses what I used? Yep- that would be a pool noodle, orange tape and twine.  All three items found at the Dollar Tree. Such a fun idea for a Nerf Birthday party that ANYONE can make! 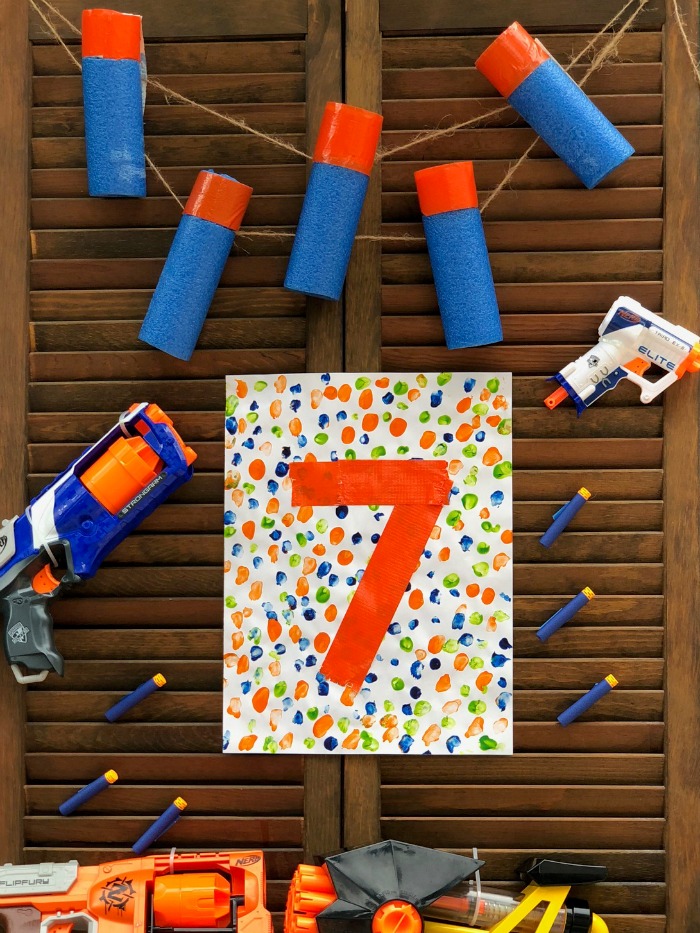 But enough about decor and cake, let’s get to the good stuff!

In addition to the Nerf guns, we had plenty of ammo ready… a great idea for a Nerf party is to have buckets of darts loaded into buckets. We definitely never ran low on ammo.

Along with a gear bag for all of the party attendees. I found these blue sacks at the Dollar Tree and then used a Sharpie to personalize them. These bags served as their party favors and were filled with the ultimate Nerf War party necessity….

Each boy at the Nerf War party got their very own Nerf vest, wrist band, goggles, loads of darts and a bandanna. I found the kits on Amazon and it honestly “MADE” the party. They were a huge hit and it killed two birds with one stone since this was the party favor too.  I shopped around and found that these kits for $8.99 a piece were by far the best value and the quality was just fine.  The blue sacks were perfect because they could put everything in them while they were here.  The bags stores all of the Nerf gear, their Nerf guns that they brought and their shirts when they got too hot.

We collected a few large boxes in the weeks leading up to the Nerf war party. Then we placed them all around the back yard as “bunkers”. This was a very simple (and free!) addition, and it was fun for them to have these little hideouts during the battles.

Overall, the Nerf birthday party was a huge success and Sweet P could not have been more appreciative. And I must admit, Nerf battles and 7 year old boys are pretty RAD!